On December 6, 2019, a one-day workshop was held in Kulob city in the framework of the project “Action based on forecasting” with the support of the German Red Cross (SSC) for the preparation of the Protocol for previous activities for the abnormal winter. The project coordinator from the RCST JC and SSO, executive secretaries of the RCST units from Murgab, Khovaling, Lakhshva and Mastchoh Kuhi districts and coordinators of the RCST emergency response centers from Sughd region, GBAO, Kulyab region, Kulyab region, Kulyab region, Kulob, Lakhsh, Mastchoh Kuhi, Khovaling districts and from Khorog city. In total, more than 20 (twenty) people attended the workshop. 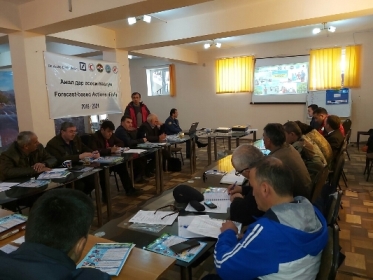 It should be noted that since January 2019, the Tajik Red Crescent Society (TRCS) with the support of the German Red Cross and in close cooperation with the Agency for Meteorology under the Government of the Republic of Tajikistan and the Committee for Emergency Situations and Civil Defense under the Government of Tajikistan. ) launched the “Action Based on Forecasting” project, funded by the German Bank (Deutsche Bank Stiftung). The main goal of the three-year project is to implement Early Operations based on disaster forecasting with the highest probability of impact on vulnerable areas.

Supporting the vulnerable people during the holy...

Conducting of information sessions on prevention of...

Annual meeting of the RCST sector

Meeting of the Secretary General of the...

Conducting speeches and meetings in the districts...

Meeting of the leadership of the RCST...

Report meeting in the RCST